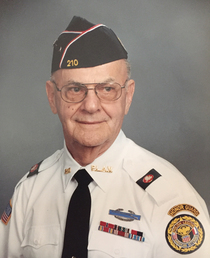 Mr. Kocoloski, 92 of Zanesville, Ohio, formerly of Altoona, passed away Friday morning at his residence.

He was born in Altoona, son of the late Walter and Margaret (Romerowicz) Kocoloski. He married Josephine F. Filus on Nov. 28, 1945, in Gallitzin.

Mr. Kocoloski was a member of St. Nicholas Catholic Church in Zanesville. He was Vice President of A&P Foods and President of Shop Rite Foods.

Blaine was a veteran of the United States Army, having served in WW II in Italy, France and Germany with Cannon Company, 180th Infantry Regiment.

He was a Graduate of Altoona High School, class of 1940, and Duquesne University Pittsburgh, Pa., class of 1951.

In lieu of flowers, the family wishes contributions to be sent to Genesis Hospice, 713 Forest Ave., Zanesville, Ohio 43701.

To order memorial trees or send flowers to the family in memory of BLAINE L. KOCOLOSKI, please visit our flower store.