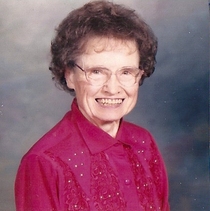 Blanche E. Nigborowicz, 94, West Chester, formerly of Broad Avenue, Altoona, died Sunday morning at LifeCare Hospital in West Chester.
She was born in Altoona, daughter of the late John and Josephine (Babiak) Romerowicz. She married Dr. Thaddeus A. Nigborowicz on July 14, 1946, in Altoona, and he preceded her in death on May 22, 1991.
Surviving are two daughters: Ann Wujcik and husband, Dr. Walter, of West Chester, and Louise Wolf and husband, Donald, of Pittsburgh; a son, Dr. Ronald J. of Pittsburgh; 10  grandchildren: Dr. Thaddeus J. and wife, Kris, Timothy, Brian, Patrick and Meghan Nigborowicz, Matthew, Daniel and Christopher Wolf, and Marianne and John Wujcik; and three great-grandchildren:  Ryan, Kaitlyn and Sean Nigborowicz.
She was preceded in death by a brother, Alex Romer; a sister, Charlotte Wlazlowski; and a daughter-in-law, Viola Nigborowicz.
Blanche was a 1938 graduate of Altoona High School and a graduate of Mercy Hospital School of Nursing. She was a registered nurse and also a homemaker. She was a member of Our Lady of Lourdes Catholic Church and the Confraternity of Christian Mothers of the church. She enjoyed baking and collecting recipes.
Friends will be received from 6 to 9 p.m. Thursday, Nov. 13, 2014, and 9 to 10:30 a.m. Friday, Nov. 14, 2014, at Stanley J. Krish Funeral Home Inc., 1204 17th St., Altoona, where a vigil for the deceased will be held during visitation Thursday. A funeral Mass will be celebrated at 11 a.m. Friday, Nov. 14, 2014, at Our Lady of Lourdes Catholic Church by Father David Rizzo. Committal will be at Calvary Cemetery, Altoona.
In lieu of flowers, the family requests that memorial donations be sent to the American Heart Association,  Four Gateway Center 444 Liberty Avenue, Ste. 1300 Pittsburgh, PA 15222-1207
To order memorial trees or send flowers to the family in memory of BLANCHE E. NIGBOROWICZ, please visit our flower store.