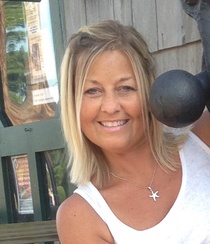 She was born in Altoona, daughter of Regis S. and Catherine H. “Cathy” (Radwanski) Rougeux.

Surviving are her parents of Altoona; a brother, Lance, and wife, Martha, with whom she resided; her godfather, Jack Robine and wife, Fran; her godmother, Jeannie Kelley and husband, Robert; her aunt, Janice Pastorek and husband, John; and nine cousins: Suzette, Yvette, Doug, Laura, Debbie, Denise, Dana and special cousins, Jacki and Jen, for whom she was a nanny.

She was preceded in death by a niece, Grace.

Danyll was a 1991 graduate of Altoona Area High School and a 1995 graduate of Bowling Green State University, receiving her bachelor’s degree. She was creative in marketing and sales and employed by various companies.

Danyll was of the Catholic faith and a board member of the Purple Feet Foundation. She enjoyed animals, especially her dog, Carter, and her cats, Lexi and Thomas. She also enjoyed going to the beach, working on crafts and organizing events.

Friends will be received from 4 to 8 p.m. Wednesday, June 3, 2015, at Stanley J. Krish Funeral Home Inc., 1204 17th St., Altoona. A funeral Mass will be celebrated at 10 a.m. Thursday, June 4, 2015, at the Cathedral of the Blessed Sacrament, Altoona, by Monsignor Robert Mazur. Inurnment will be at SS. Peter and Paul Roman Catholic Cemetery, Altoona.

To order memorial trees or send flowers to the family in memory of DANYLL R. ROUGEUX, please visit our flower store.