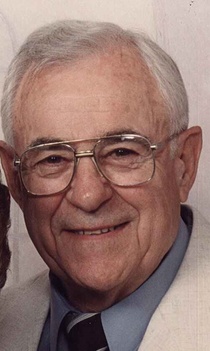 Ernest D. “Ernie” Tomassetti, 90, Altoona, passed away Monday afternoon at his residence surrounded by his family.

He was born in Altoona, son of the late Donato “Daniel” and Giovanni (Plevano) Tomassetti. He married Helen T. Kocoloski on June 23, 1951, at SS. Peter and Paul Roman Catholic Church, Altoona.

Ernie was a 1942 graduate of Altoona High School. He served in the U.S. Navy in the Pacific during WWII as an aviation radioman third class. He retired as a mail clerk in 1989 from the Altoona Post Office. He was a member of St. Michael the Archangel Catholic Church, Hollidaysburg, the Bavarian Aid Society, St. Stanislaus Kostka Brotherhood, Unter Uns, A&J Iaia American Legion Post and Abruzzese Society.

Ernie was a basketball and baseball coach for the parochial and youth leagues. He enjoyed bowling, attending the Altoona Curve baseball games and puttering around the house.

Friends will be received from 2 to 7 p.m. Thursday, April 30, 2015, at Stanley J. Krish Funeral Home Inc., 1204 17th St., Altoona. A funeral Mass will be celebrated at 10 a.m. Friday, May 1, 2015, at St. Michael the Archangel Catholic Church, Hollidaysburg, by Monsignor Stanley Carson. Committal will be at SS. Peter and Paul Roman Catholic Cemetery, Altoona.

To order memorial trees or send flowers to the family in memory of ERNEST D. "ERNIE" TOMASSETTI, please visit our flower store.