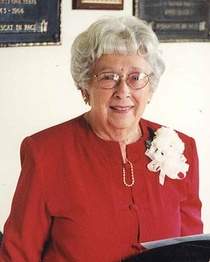 She was born in Altoona, daughter of the late Sigmund and Rose (Pokorny) Jorkasky. She married Kenneth P. Benton Sr. on June 25, 1941, at SS. Peter and Paul Roman Catholic Church, and he preceded her in death on Aug. 2, 1970.

She was preceded in death by three sisters: Therese McClain, Patricia Wertner and Marie O'Leary; a brother, Eugene; and a daughter-in-law, Sue Benton.

Helen was a 1936 graduate of Altoona High School and a 1972 graduate of the Altoona School of Commerce. She retired as blood services director for the American Red Cross in 1984 after 10 years of service and continued with volunteer work for the Blair County Chapter. She was chairwoman of the Advisory Council and a member of the Blood Services Committee for the Johnstown Regional Blood Center.

Helen was a former member of Our Lady of Fatima Parish, an active lifelong member of SS. Peter and Paul Roman Catholic Church, a member and prefect of the Rosary Society, recording secretary, president and treasurer of St. Hedwig's Society, and a member of Polish National Alliance, Group 2091 and Blair County Senior Citizens. She was a devoted Catholic by going to Mass and Rosary every day. She was an avid reader and enjoyed playing bingo.

Friends will be received from 11:15 a.m. to 1:15 p.m. Monday, Feb. 16, 2015, at the St. Joseph Chapel at Garvey Manor Nursing Home, where a funeral Mass will be celebrated at 1:30 p.m. Monday by Father Timothy Grimme. Committal will be at SS. Peter and Paul Roman Catholic Cemetery, Altoona.

To order memorial trees or send flowers to the family in memory of HELEN M. BENTON, please visit our flower store.