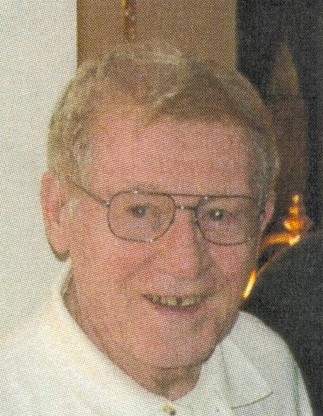 James Richard Riley, 91, of Altoona, passed away Monday afternoon at Garvey Manor Nursing Home, Hollidaysburg, surrounded by his family. Jim was born in Altoona, son of the late Charles D. and Wilhelmina B. (McIntosh) Riley.

He was preceded in death by two brothers, David and his wife Carol (McGirk) Riley and Joseph Riley; and a life-long friend, Charles Hammond of Sayre.

He was a lifelong member of St. Leo the Great Catholic Church (Our Lady of Fatima). Jim was also a member of the male diocesan singing group under the Conductor of the Altoona Symphony Orchestra.

He was the last surviving charter member of the former Altoona Serra Club. As a Serran, he instituted the Altruism Awards to a senior Bishop Guilfoyle High School.

Following his father’s death, he was President of Riley, Inc. Plumbing and Heating Contractors and retired after 67 years of service. Jim served on plumbing boards and as interim plumbing inspector for the City of Altoona.

He played baseball for Altoona Catholic High School and the City League and was an assisted with coaching 5th ward baseball teams in the Junior Baseball Federation.

Jim was a scoutmaster for many years. As a teenager, he was a Sea Scout and sailed on the Chesapeake Bay and a Navy Minesweeper on Lake Erie.

Jim enjoyed listening to tenor voices of Italian and Spanish singers and was an avid non-fiction reader.

Most of all, he and Lois were blessed and enjoyed having their children and grandchildren living nearby and vacationing together in Outer Banks, N.C.

Family and friends are invited to attend the funeral Mass at 10:30 am Friday, April 16, 2021, at Our Lady of Fatima Catholic Church, 12th Ave & 20th St. Altoona, by Monsignor Stanley B. Carson. COVID-19 protocols are mandatory. Committal will be made at Calvary Cemetery.

To order memorial trees or send flowers to the family in memory of JAMES R. RILEY, please visit our flower store.