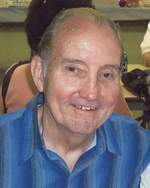 Joseph D. Milliron, 83, Altoona, died at his home. He was born in Juniata, son of the late Hiram and Annie (McSherry) Milliron. He married DeLellis “Bebe” McCall on Aug. 16, 1958, at St. Leo the Great Catholic Church.

Surviving are his wife of 54 years, Bebe; two sons: Michael (Renee’) and Gregory, both of Altoona; two daughters: Monica (Chris) Burgess of Byfield, Mass., and Charlotte (Mark) Dillen of Bellwood.

He was preceded in death by two brothers: James and John; and three sisters: Rose Marie Simanski, Mary Dora and an infant girl.

Joe served in Korea and was awarded the Purple Heart. He retired as a police officer from the City of Altoona. He was a member of Our Lady of Fatima Parish, Nocturnal Adoration Society, Bernard A. Good VFW Post 8685, Fort Apache, Bavarian Aid Society, Frohsinn Singing Society and St. Stanislaus Kostka Brotherhood.

He loved his family and enjoyed friends, camping, woodworking, dancing and Irish music.

To order memorial trees or send flowers to the family in memory of JOSEPH D. MILLIRON, please visit our flower store.