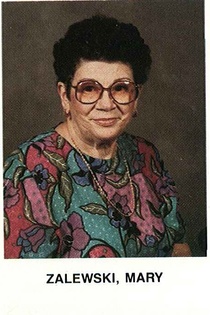 She was born in Altoona, daughter of the late Kazimier and Kathryn (Chalinski) Galant. She married John Joseph Zalewski on July 9, 1939, at Our Lady of Czestochowa Catholic Church, Brooklyn N.Y., and he preceded her in death on June 12, 1991.

She was preceded in death by four sisters: Veronica Goclowski, Helen Galant, Sophie Galant and Frances Berg; and two brothers: Michael and Stanley.

Mary had been a caster for The Bassick Co., Bridgeport, Conn., and had also worked for the Bulova Watch Co. for nine years. She attended Our Lady of Mount Carmel Catholic Church and was a former member of Our Lady of Fatima Parish. She had been the prefect of the Rosary Society of the former SS. Peter and Paul Roman Catholic Church and vice president of the St. Hedwig's Society.

Friends will be received from 9 to 10 a.m. Saturday, Nov. 8, 2014, at Stanley J. Krish Funeral Home Inc., 1204 17th St., Altoona. A funeral Mass will be celebrated at 10:30 a.m. Saturday at Our Lady of Mount Carmel Catholic Church, Eighth Avenue and 11th Street, Altoona. Private interment will be at the convenience of the family at SS. Peter and Paul Cemetery.

To order memorial trees or send flowers to the family in memory of MARY B. ZALEWSKI, please visit our flower store.