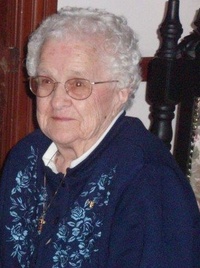 Mrs. Nellie M. Pacovsky 94, Altoona, passed away Friday morning at her residence, surrounded by her family.

She was preceded in death by her son, Stephen P. Pacovsky in 2010; and her brothers: Peter, Walter and Joseph Prugar.

She was a member of St. Mary Catholic Church.

Prior to retiring at the age of 79, she was a Cafeteria Worker for the Altoona Area School District. Prior to that, she worked for the Pennsylvania Railroad and also at Schwartz Bach Silk Mill.

To order memorial trees or send flowers to the family in memory of NELLIE M. PACOVSKY, please visit our flower store.