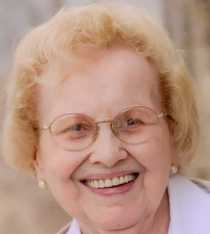 Patty was born in Altoona, daughter of the late Harry and Mary (McCabe) Morgan.  She married Jack Ingham on June 20, 1946, in Altoona.

She is survived by her loving husband of 69 years; one daughter, Sherry (Daniel) Buck; two grandchildren:  Erin and Adam Buck; a great-granddaughter, Madeline; and one brother, Roger J., all of Altoona.

She was preceded in death by a sister, Betty M.; and two brothers: Harry T. Jr. and Robert J. Morgan.

Patty was a lifelong member of the Second Avenue United Methodist Church (formerly United Bretheran), where she served as an assistant in the Primary Department and was a longtime member of the Sunshine Sunday School Class. Together with her husband, she faithfully visited shut-ins and brought them communion.

Patty graduated from Altoona High School in 1941, and went to work for the Pennsylvania Railroad.  She retired as a clerk with 40 years of service.

She enjoyed spending time (and shopping for) her family, especially her grandchildren.  She enjoyed watching Penn State football, working puzzles and dancing.

At the request of the family, there will be no visitation. A private committal will be held at Alto-Reste Park with a memorial service, celebrating Patty’s life, to be held at Garvey Manor Chapel at a later date.

The family suggests that memorial donations be sent to the loving ministry of Garvey Manor 1037 S. Logan Blvd. Hollidaysburg, Pa. 16648 in Patty’s name.

To order memorial trees or send flowers to the family in memory of PATRICIA J. INGHAM, please visit our flower store.