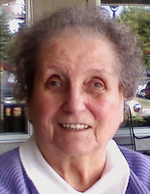 Rose Marie Simanski, 79, Altoona, died peacefully Tuesday morning at Garvey Manor Nursing Home, Hollidaysburg.She was born in Altoona, daughter of the late Hiram and Anne (McSherry) Milliron. She married Robert A. Simanski on June 18, 1960, at Holy Rosary Catholic Church.Surviving are her husband, Robert, of 51 years; three children: John F. and wife, Esther, and their children, John R., Christal Ann and Joseph D., all of Fort Worth, Texas, Mary Ann Krish and husband, Stanley II, and their children, Josh and Katie, all of Altoona, and Lisa Karl and husband, John, of Stormstown and their children, Nicholas of Stormstown and Amanda of Williamsport; a brother, Joseph and wife, BeBe, of Altoona; and a sister-in-law, Zita Milliron, wife of Rose's late brother, John.She was also preceded in death by her other brother, James; a sister, Mary Dora; and an infant sister.Rose was a graduate of Altoona Catholic High School. She retired in 1986 as a cook from Valley View Home. She was a member of Our Lady of Fatima Catholic Church and was a former sacristan for the former SS. Peter and Paul Roman Catholic Church for many years. She was also a member of the Nocturnal Adoration Society, a former Cub Scout and Webelos den mother for many years and past president and member of the Ladies Columbian Circle.Rose enjoyed her monthly pinochle card group and her Tuesday breakfast club.Friends will be received from 2 to 4 and 6:30 to 8:30 p.m. Friday, Dec. 9, 2011, at Stanley J. Krish Funeral Home Inc., 1204 17th St., Altoona, where a vigil for the deceased will be held at 7:30 p.m. A funeral Mass will be held at 10 a.m. Saturday, Dec. 10, 2011, at Our Lady of Fatima Church, 12th Avenue and 20th Street, Altoona, by Father James D. Zatalava. Committal will be at SS. Peter and Paul Roman Catholic Cemetery.In lieu of flowers, the family requests that memorial donations be sent to Garvey Manor Nursing Home, Activities Department Fund, c/o Sister Joachim, 1037 S. Logan Blvd., Hollidaysburg, PA 16648.

To order memorial trees or send flowers to the family in memory of ROSE MARIE SIMANSKI, please visit our flower store.