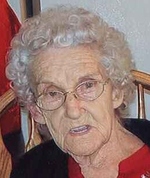 She was born in Altoona, daughter of the late Walter and Margaret (Romerowicz) Kocoloski. She married Robert J. Elvey on Aug. 10, 1946, at SS. Peter and Paul Roman Catholic Church, and he preceded her in death on Jan. 13, 1990.

She was preceded in death by her grandson, Shawn Patrick McGowan; and three sisters: Stella Chislow, Cecelia Lockard and Blanche Munsch.

Sophie enjoyed her card club, gardening and putzing around the yard and especially spending time with her family and friends. She was on the election board at the Wehnwood precinct for 40 years.

To order memorial trees or send flowers to the family in memory of SOPHIE MARIE ELVEY, please visit our flower store.