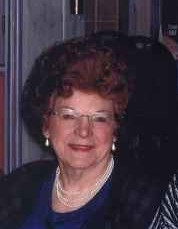 Theresa C. Kennedy, 89, was taken to Glory on Friday while her family sang her "Amazing Grace."

She was born in Ashville, one of 13 children of the late Felix and Goldie Agnes Dougherty. On Feb. 18, 1950, she married Sheldon Kennedy at Our Lady of Lourdes Catholic Church, Altoona.

She was preceded in death by three brothers: Augustine, Joseph and John; three sisters: Anna Marie, Rose and Rita; and a great-granddaughter, Dresden Ellenberger.

She worked at Sylvania during WWII and later worked and retired from McCartney's Office Supplies. She was a member of Saint Therese of the Child Jesus, where she sang in the choir and belonged to the Christian Mothers. She also enjoyed being a Faithful Follower at Calvary Baptist Church.

Friends will be received from 2 to 4 and 6 to 8 p.m. Tuesday May 30, 2017, and Wednesday from 9 to 9:30 a.m. at the Stanley J. Krish Funeral Home, Inc., Altoona. A vigil for the deceased will be held Tuesday evening. A funeral Mass will be celebrated at 10 a.m. Wednesday at Saint Therese of the Child Jesus Catholic Church, Father D. Timothy Grimme officiating. Committal will be at Calvary Cemetery.

To order memorial trees or send flowers to the family in memory of THERESA C. KENNEDY, please visit our flower store.