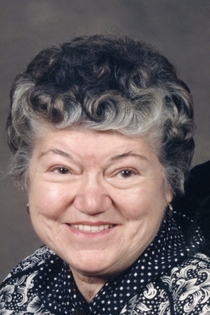 She was born in Altoona, daughter of the late Kazimier and Kathryn (Chalinski) Galant. She married Joseph B. Goclowski on July 29, 1946, at SS. Peter and Paul Roman Catholic Church, and he preceded her in death on Nov. 8, 2003.

Surviving are a daughter, Dian Watson and husband, Michael, of Marietta, Ga.; two grandsons: Ian Watson and wife, Laura, of Canton, Ga., and Joseph Watson and fiancee, Jessica Steele, of Marietta; two great-grandsons: Liam and Rylen; and a sister, Mary B. Zalewski of Hollidaysburg.

She was preceded in death by a grandson, John Wehrle, in 1983; two brothers: Michael and Stanley; and three sisters: Helen Galant, Sophie Galant and Frances Berge.

Veronica retired as a registered nurse from the Van Zandt VA Medical Center, and prior to that she had worked as a private-duty nurse and in Dr. DiGiacobbe's office. She was a former member of Our Lady of Fatima Parish and a former member of SS. Peter and Paul Rosary Society, St. Hedwig Society and Polish National Alliance.

Friends will be received from 9 to 11 a.m. Friday, Sept. 5, 2014, at Stanley J. Krish Funeral Home Inc., 1204 17th St., Altoona. A funeral Mass will be celebrated at 11:30 a.m. Friday at Our Lady of Fatima Catholic Church, 12th Avenue and 20th Street, Altoona, by Father James D. Zatalava. Private committal will be at SS. Peter and Paul Roman Catholic Cemetery, Altoona.

To order memorial trees or send flowers to the family in memory of VERONICA BERNICE GOCLOWSKI, please visit our flower store.