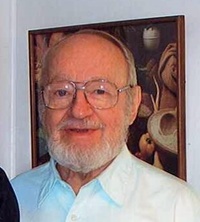 He was born in Pittsburgh, son of the late Pawel and Mary (Zajac) Prugar.  He married Dolores S. Ziobro on Sept. 10, 1955, in Pittsburgh.

He was preceded in death by his parents; and a brother, Paul Daniel Prugar.

Vincent was a 1947 graduate of North Catholic High School in Pittsburgh. He then enlisted in the U.S. Air Force, serving as staff sergeant attached to the 23rd medical group during the Korean War. He was honorably discharged on Feb. 1, 1952. The first in his family to attend college, he went on to receive his degree from the Duquesne University School of Pharmacy in 1956. He was employed at Black's Pharmacy and retired from Dick's Pharmacy in 1993.

Vincent was a member of Holy Rosary Catholic Church. He enjoyed gardening and golfing.

In lieu of flowers, please have masses said in remembrance of Vincent.

To order memorial trees or send flowers to the family in memory of VINCENT E. PRUGAR, please visit our flower store.